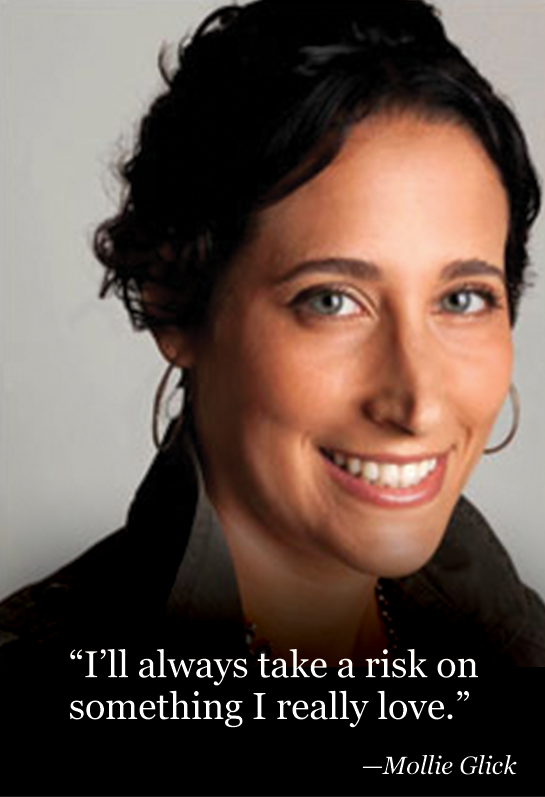 Literary agent Mollie Glick discusses what drew her to being an agent, what kind of query letter gets a quick delete, thoughts on chick lit, and more in this 5 On interview.

After graduating from Brown University, Mollie began her career as a literary scout, advising foreign publishers regarding the acquisition of rights to American books. She then worked as an editor at the Crown imprint of Random House before becoming an agent in 2003. Mollie represents New York Times bestsellers Jonathan Evison (West of Here), Carol Rifka Brunt (Tell the Wolves I’m Home), Sarah McCoy (The Baker’s Daughter), and Jessica Verday (The Hollow), as well as International Bestsellers Kimberly Rae Miller (Coming Clean) and Josephine Angelini (Starcrossed), but she also takes great pride in breaking out a number of debut novelists each year. Her list includes literary fiction, narrative non-fiction, popular science, memoir, and YA projects.

Mollie Glick only accepts submissions by email. For more information on submitting your project, please see the Foundry Submissions page.

KRISTEN TSETSI: I’ve seen a few interviews with literary agents who, when asked what they would be doing if they weren’t agents, say, “I’d be writing.” In the order passions fall, I think there are people who are readers first and writers second, and those who are writers first and readers second. You’ve said you were a bookworm as a child and that you later decided to get paid for doing what you love: reading. Do you think how you see manuscripts as first a reader is any different from what they might be if you were first a writer?

MOLLIE GLICK: No, but being in publishing absolutely does inform how I read books for pleasure! I’m always itching to get my hands in there and fix things.

You mentioned recently that you think it’s unfortunate chick lit has become harder to sell. What should detractors of chick lit, most of whom may or may not have ever read it, know about the value of the genre, and who are your favorite chick lit writers?

It’s not so much that I’d want to do chick lit, it’s that I like smart women’s fiction that is sometimes derided as chick lit, or relegated to the women’s-fiction ghetto when it’s really just literary fiction. And I believe in the power of a good plot!

What made you decide to leave editing for a literary agency?

I think I was always an agent at heart. The moment I found out there was such a thing as a literary agent, I knew that was the right path for me. It just took a beat to get the right job.

I absolutely love being an agent—I get to work on both the artistic side, helping editors to develop their craft, and the business side, wheeling and dealing and acting as a fairy godmother, making people’s dreams come true. Plus I get to take on whatever I believe in without having to consult a room full of people before I do so. And on top of that, I get to work across genres, repping both literary fiction and memoir and narrative nonfiction, YA and middle grade, rather than being hemmed in by the kind of book one publishing house represents? Done!

In almost every interview with you that I found online, you praise Audrey Niffenegger’s The Time Traveler’s Wife. What about that novel do you love so much, both as an agent and as an everyday reader, and what can writers learn from it?

Such a brilliant work! I just think it works on every level. It’s high concept, but beautifully written. It has characters who feel like lifelong friends. It’s got a complex but readable narrative structure. And the ending makes me tear up every time. I also really love and frequently reference Mary Doria Russell’s The Sparrow and Maria Semple’s Where’d You Go, Bernadette. They’re all books I could read over and over again.

What was the first book you sold as an agent, what was it about the writing that appealed to you enough to pitch it in what I can only assume would be a nerve-racking first-time experience (or did having been an editor make you immediately fearless as an agent?), and how did you celebrate?

A really wonderful book on marketing for nonprofits! Not the kind of book I ultimately meant to represent—I rarely do practical books like that any more—but it was a book that could do some good in the world. I don’t remember how I celebrated, but probably by treating myself to a meal out, since I was scraping by on an assistant’s salary at the time.

A literary agent opens a query addressed specifically to her (not a mass email), sees X, and immediately hits Delete without reading further. What is your X likely to be, and is there a universal X agents might groan over together while out for coffee?

Over-familiar salutations or rants about how publishers just don’t see the value of a “guaranteed bestseller” send my fingers scurrying for the Delete key.

Can you think of novelists who published in the ’60s, ’70s, or ’80s who would probably not have much luck, as emerging authors, finding a publisher today?

I wonder whether someone like Ann Tyler would make it today, when she grew so much from book to book. Especially in an age like now when her books might have been dismissed as women’s fiction and not gotten the reviews they probably did back then. But I bet Judy Blume would have been an even bigger hit today!

There’s an old saw that if you sell every single book you take on, you’re not taking enough risks, and I absolutely believe that. I’ll always take a risk on something I really love. Sometimes those risks pay off bigtime. Sometimes they don’t. But I never regret taking a chance.

I’ve definitely got a few authors who live off of their writing, but I don’t encourage people to jump ship too fast. Sometimes people think not having a day job is a way to be more creative, but you never want to be in the position of rushing work out the door before it’s ready because you’re desperate for your next payday. That’s not the best scenario for creating great work.

Business strategist Benjamin Gilad writes, “[T]here are 313.8 million potential writers out of 313.9 million Americans. (The others have real jobs.) Defying odds lower than winning Powerball, those starry-eyed hopefuls keep sending their horrible manuscripts to the agents.…”

Obvious hyperbole, but it did make me wonder: in a list of a hundred queries, how many of the hundred writers submitting to you are professional-level writers, and how many are clear beginners who need more time working on their writing? Are you happy to take on beginning writers who will need a fair amount of editing if the story appeals to you?

I’m definitely looking for both polished writing and a great premise. I will absolutely work with an author to refine their craft, but the germ of a great product has to be there.

Gilad compares publishing to the lottery (don’t we all?), but adds that it’s also skewed toward women. Not only do women read more than men, but there are believed to be more female than male literary agents (I can’t find numbers on this, but in Query Tracker’s lists of top ten agents in terms of most queried, most accepting, most rejecting, and most non-responsive agents, the majority are women).

Perhaps there are more women writing, and there are definitely more women buying books, but women are also much less likely to be reviewed in the New York Times and other prestigious publications. I definitely don’t pay attention to gender when reading my queries—I’m just looking for the next great project.