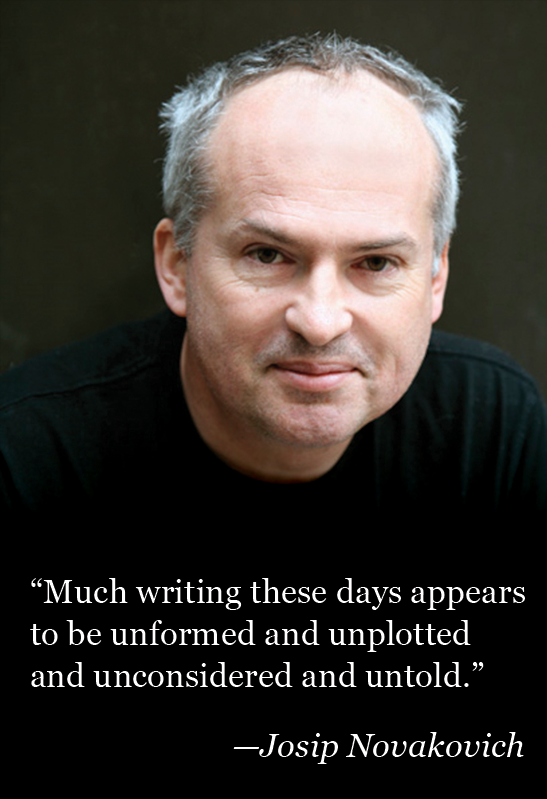 In this 5 On interview, Josip Novakovich discusses expectations vs. reality, the role of writing instruction, trends in writing, and more.

Josip Novakovich (Croatian: Novaković) is a Croatian-American writer. He was born (in 1956) and grew up in the Central Croatian town of Daruvar, and he studied medicine in the northern Serbian city of Novi Sad. At the age of twenty he left Yugoslavia, continuing his education at Vassar College (B.A.), Yale University (M.Div.), and the University of Texas at Austin (M.A.). He has published a novel (April Fool’s Day), three short story collections (Yolk, Salvation and Other Disasters, Infidelities: Stories of War and Lust), two collections of narrative essays (Apricots from Chernobyl, Plum Brandy: Croatian Journeys) and two textbooks (Fiction Writer’s Workshop, Writing Fiction Step by Step). Novakovich has taught at Nebraska Indian Community College, Bard College, Minnesota State University Moorhead, Antioch University in Los Angeles, and the University of Cincinnati, and is now a professor at Pennsylvania State University.

Novakovich is the recipient of the Whiting Award, a Guggenheim fellowship, two fellowships from the National Endowment of the Arts, an award from the Ingram Merrill Foundation, and an American Book Award from the Before Columbus Foundation. He was anthologized in The Best American Poetry, the Pushcart Prize collection,  and O. Henry Prize Stories.

KRISTEN TSETSI: Was there ever a point at which you felt you had “made it” as a writer?

JOSIP NOVAKOVICH: My moods ebb and flow. I felt like I had made it when HarperCollins signed me up for two books—but that lasted only a few days, that sensation. And when I got the Whiting Award, I imagined for a day or so that writing and publishing would be easier than it had been. Now I just have the impression that writing, at least mine, is a permanent state of shortcomings.

You use your texts on writing as a guide for your classes. What value do writing classes add to the development of writing skills?

Well, that’s pretty individual. Some people respond well to coaching, and others hate it and do better on their own. For most developing writers it’s good to be in a workshop now and then to see how others read their work, to see how they communicated, what carries across the I and Thou divide. And sometimes there are even a few technical tidbits one picks up in a workshop, such as how to cross out superfluous and implied words.

You’ve said you recently began using more sentence fragments “like my students.” This sounds suspiciously like a writing trend. What do you see happening in today’s writing that is exciting or interesting, and what do you wish today’s writers would stop doing (in addition to overusing fragments)?

Well, in some cases hypertextuality and multi-mediality, all sorts of links in the work leading out of it to other sites and information—that seems exciting and mind-expanding.

I am tired of the present tense and the “you” POV, though. To begin with, the present tense is usually a violation of grammar in current fiction usage. He now stands in the door and waits for Helen. . . . The present simple works if we say often, and if we mean repeated action. But if we mean this moment, we should correctly write: He is now standing and waiting. . . . But that is not how people usually put it when they write in the present tense.

Past tense gives you confidence that the event is over and you can relate it and shape it, but the present action, while immediate, is unformed, and frequently that is how the writing these days appears to be, unformed and unplotted and unconsidered and untold. I shouldn’t generalize, but often that is how it is.

How do you approach the writing of a short story collection? Do you write the stories as they come to you and then select the ones that fit into a unifying theme, or do you first identify a theme and then write to it? Is there a “right” way to do it?

I just write stories and then I put them together, sometimes even if they don’t quite fit. It’s a collection, usually, not of linked stories, in my case. Of course, linking is preferable, usually, as you can claim it’s a novel, and your agents and editors will love you then.

Is crossing genres something you would advise or discourage in other writers?

I have often crossed genres from fiction into nonfiction and back, and then called the work fiction. It’s good to fertilize stories with genuine impressions and observations and journalism. The other way round, to invent in a piece of nonfiction, not so.

One of the first rules of marketing or promoting your published writing is, “Have an author website.” Why don’t you have one?

I used to have one, but I didn’t heed the warning that the carrier was discontinuing services and to move it to another one, so I lost it, and somebody in Japan bought the rights to my domain name, josipnovakovich.com, and I never felt like pursuing the issue to get it back. I think with Google, Facebook, etc., anybody who wants to find information will find it, and websites won’t change much.

You’ve been called “the best American short stories writer of the decade” by Kirkus Reviews. How easy (or how much of a challenge) is it for you to find desired publishers for your work at this point?

At the moment it is hard again, as my book sales with HarperCollins haven’t been great, and they have been low with my last publisher, Dzanc, but next round I will be a better promoter of my work.

It’s difficult for many writers to condense their own novels into one or two compelling paragraphs for a query letter. Is this something that can be taught, and do you have any tips/ideas based on what has worked for you?

It does depend on the novel. A thematically sharply focused novel is easy, as is a well-plotted novel, but psychological and literary ones often can’t be amiably squeezed into a paragraph. Well, what would you say about Remembrance of Things Past? Or War and Peace? Give me a zinger for one of these.

Have you had work you knew was good rejected by publishers? If so, what did you do with the rejected/unpublished material?

Well, yes, I have had and have such work, and I sometimes neglect it for a couple of years and then give it another spin. Maybe revise again, or maybe just send again, and place somewhere. In some cases, I know I have a good story and nobody bites, and then I publish it online or in a small journal when solicited for work.

Do you think you would ever self-publish?

Sure. I think the more effective the internet is, the more likely it is that I will. But then I’ll have to have a website, won’t I?