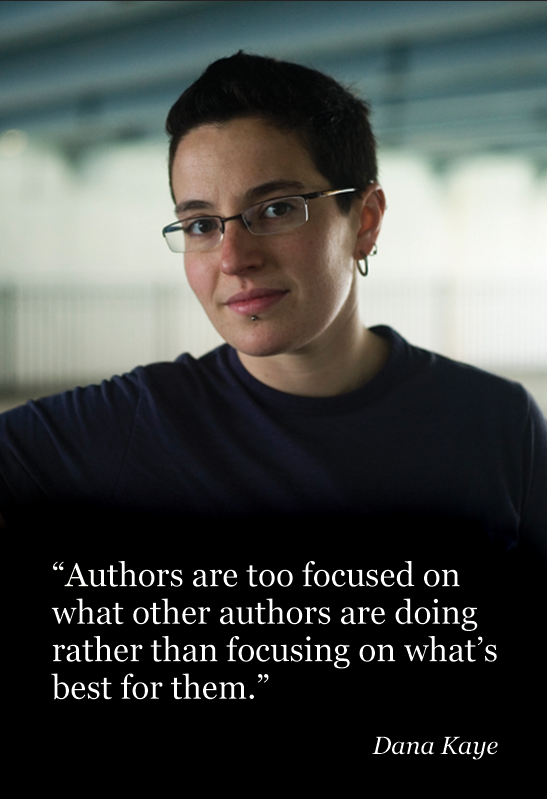 In this 5 On interview, publicist Dana Kaye discusses why not to pretend to be a publicist, the question of gender bias in publishing and publicity, marketing mistakes and misconceptions, and more.

Dana Kaye (@Dana_Kaye) received her B.A. in fiction writing from Columbia College Chicago. After college, she worked as a freelance writer and book critic. Her work has appeared in the Chicago Sun-Times, Time Out Chicago, Crimespree Magazine, Windy City Times, Bitch Magazine, and on GapersBlock.com. This experience has been crucial to her publicity career: she has the contacts and necessary industry insight to form pertinent, widespread media campaigns.

Dana is known for her innovative ideas and knowledge of current trends. She frequently speaks on the topics of social media, branding, and publishing trends, and her commentary has been featured on websites like the Huffington Post, Little PINK Book, and NBC Chicago.

KRISTEN TSETSI: What subject matter interested you the most when you were a freelance writer?

DANA KAYE: This may come as a shocker, but books, of course! My favorite pieces to write were author profiles or features. Not only did I love learning about their process and backstory, they were always so excited to be featured. Even the household names I interviewed seemed genuinely grateful that I was writing about them.

I would think, maybe incorrectly, that anyone who’d spend money on a fiction-writing degree would have to be passionate about writing. Why did you switch from writing to, as one of your online bios reads, “the other side of the press kit”? What kind of thoughts fed into that change in direction, and do you remember the moment when you said “this is definitely it” to taking the decisive step?

You are correct, I am passionate about writing and storytelling, and that’s why I pursued a degree in creative writing. But being on the other side of the press kit doesn’t mean I stop writing or telling stories (I mean, I’m the one who writes the press kits, after all!).

What I loved about reviewing books was that I had the opportunity to tell people what to read and bring awareness to lesser known books. However, I began to realize that reviewing books wasn’t the best way to do that; I had pressure from my editors to review certain books, and if I was assigned something, I had to review it, regardless of whether or not I liked it. I began exploring different options, and publicity/marketing seemed like the perfect fit.

When I pitch media, in essence, I’m telling the story of the author and the book and conveying why the editor or producer should want to share that story. I use the same mechanics to craft those pitches—omit needless words, use active verbs, know your audience, etc.—it just takes on a different form.

There is no greater feeling than launching the career of a debut author or boosting a midlist author onto the bestseller lists. It’s the same reason I loved writing about books as a freelancer: I get to play a small role in helping someone’s dream career become a reality.

The worst part of my job is the fact that there’s only so much I can do. I’ve worked on books where we’ve executed a dream campaign—interviews on national morning shows, reviews in national newspapers, etc.—but because of something having to do with sales or marketing or the retailers, the book didn’t sell. Even though I knew we did our part (and did it well), it was still a huge blow when I received the sales figures at the end of the month. There are also times when, for whatever reason, the media is just not biting. Or we’ll have great media coverage but something will happen in the news cycle (Boston bombing, Hurricane Sandy) that will cause our coverage to get bumped. We can do our job to the best of our ability, but there are still things out of our control.

That and bookkeeping. Bookkeeping is the worst.

There’s a lot of valuable information in the form of blog posts at your website under 365 Days of Publicity. (I like “Top 5 Time/Money Wasters.”) That series, which should be its own book, ran in 2012. Will there be more blog posts in the future?

I’m so glad you liked the series! I thought about doing it as a book, but always thought a writer’s wall calendar would be better. Something to think about.

I did the series in 2012 in response to all the misinformation I was reading from other authors and PR firms. The blog posts also showcased my writing style and point of view as a publicist, which, in turn, expanded my brand.

Since then, I’ve focused that energy on writing for other sites like Publishing Crawl, NBC Chicago, and now Jane Friedman’s site.

In interview models like this one—an email Q&A exchange—how would you advise authors regarding their responses beyond trying to steer back to the book, and can you point to any interviews you’ve read over the years that they might use as examples to learn from in either direction: what to do, what not to do?

The toughest part about written interviews is conveying your voice. It’s important to write how you speak and not be overly formal just because the interview is written.

I just finished reading Catherine Nichols’s piece on Jezebel, Homme de Plume: What I Learned Sending My Novel Out under a Male Name. In it, she writes, “Within 24 hours [my six submissions under the name] George had five responses—three manuscript requests and two warm rejections praising his exciting project. For contrast, under my own name, the same letter and pages sent 50 times had netted me a total of two manuscript requests.” Do you see a similar bias on the publicity side when approaching people about your clients?

Wow, what a fascinating piece!

If I’m answering based on my personal experience, no, I haven’t seen a clear bias. The same is true for authors of different races or sexual orientations. The people we pitch tend to focus on the book, on whether it sounds interesting, and on whether it will be a good fit for their audience. But maybe I’m seeing publishing through rose-colored glasses.

There are stats out there to back up this bias, like the Vida study conducted this year. Women buy more books than men, but males dominate the world of literary criticism and the books lining bookstore shelves. While it’s an important discussion to have, it’s not something I focus on or push in my media outreach.

If a (traditionally published) author doesn’t have a company publicist actively selling her book and she wants to try promoting it herself, is it a detriment to send press releases from her own email account or to make calls to radio or TV producers herself? How big of an ethics issue would it be to make a fake email account for a fake publicist in order to create the illusion of having that kind of “I’m legit, I promise” go-between? I know someone out there has to have considered it.

I really, really hope people aren’t making up fake publicists to send out email pitches. Lying is not the way to start a business relationship (and publicity is all about creating relationships).

Most reporters or producers I know aren’t fazed by authors pitching themselves. It’s when the authors aren’t professional or don’t understand pitching best practices that it gets a little dicey. I can say with confidence that a media person would rather hear from a professional author than a non-professional publicist.

If authors want to play a more active role in publicizing their titles, my recommendation is to do the research (find out what the outlets cover, who the best contact is, etc.) and to always keep your in-house person looped in on what you’re doing. As a publicist, there’s nothing worse than talking to an editor about coverage for a book, only to have the author send out another (usually less-than-professional) pitch a few days later.

On average, what kind of jump in sales can an author expect to see after six months with a publicist?

No idea. Increasing sales of a book is like launching a missile: everyone—publicity, sales, and marketing—has to turn their keys. As I mentioned earlier, you can have a great publicity campaign, but without the support of sales and marketing, you may not see the leap and sales you hoped for.

You don’t take on self-published books for reasons you explain here. But among the traditionally published authors who appreciate your particular model (social media, out-of-the-box ideas, etc.), how do you decide who and who not to take on as clients?

I consider three factors: Do I like the author? Do I love the book? Can I execute a campaign that will achieve the author’s goals? I’ll never take on a book just because I love the author or because I can market the product. I have to be able to stand behind the author/book I’m pitching.

(a) That all publicity is good publicity. You should only pursue media coverage that is going to build your brand, reach your target audience, and generate sales.

(b) Not keeping their eyes on their own paper. Authors are too focused on what other authors are doing rather than focusing on what’s best for them.