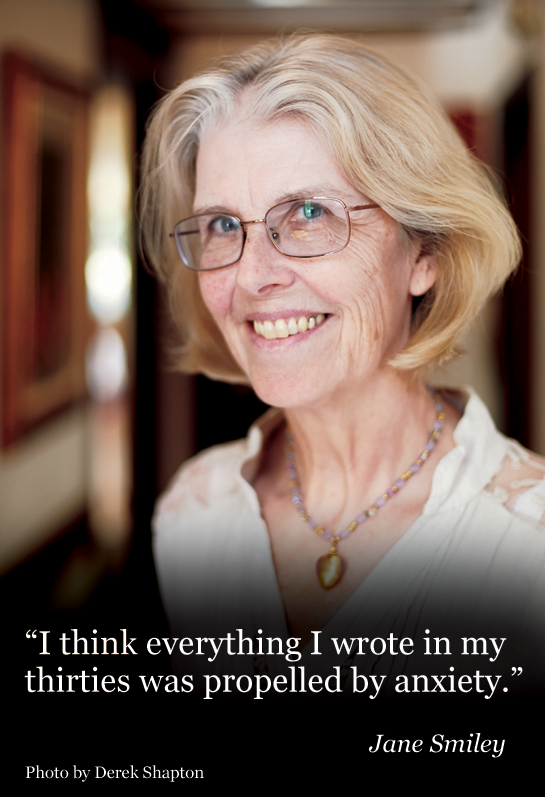 Jane Smiley on necessary compromises, writing good sex scenes, and what makes her nervous about writing even now in this 5 On interview.

Jane Smiley is the author of numerous novels—including A Thousand Acres, which was awarded the Pulitzer Prize—as well as four works of nonfiction. In 2001 she was inducted into the American Academy of Arts and Letters. She received the PEN USA Lifetime Achievement Award for Literature in 2006. She lives in northern California.

KRISTEN TSETSI: “In [Charles Dickens’s] Our Mutual Friend,” you once said, “the stalker is a young man who’s a teacher; born poor, uneasy about his social mobility.… I don’t think we can read Our Mutual Friend without seeing this stalker as a kind of weird self-portrait of Dickens and his social rise. But it’s very possible Dickens didn’t intend this at all.”

People will (and probably already do) talk about which of your novels might be an unintentional self-portrait of you, or which of your novels is most autobiographical. According to a 1998 BookPage article, “Jane Smiley doesn’t do autobiography,” but many fiction writers don’t. They aren’t catharsis writers, or self-exploration writers, but just curious, interested people. Still, pieces of the writers will eventually, inevitably, appear.

Is there a novel you would least like people to assume is or contains a self-portrait of you, even if a fun-house mirror reflection, and is there one you’d have to admit does offer more of you than the others?

JANE SMILEY: Not long ago I reread At Paradise Gate, and I was disappointed in the harsh way I had portrayed the characters, who were based on family members. I don’t know why I did that, because I remember my early life as being good humored and fun. So that is the one I would correct.

I think everything I wrote in my thirties was propelled by anxiety, and my mood since then has been more upbeat and even-tempered. I think when you are in your thirties and have children you do become much more intimidated by the world—you are on your own now and expected to deal with it, and there is a lot more to deal with—more details, more people, more issues. And then, somehow, you learn to deal with them.

When it comes to writing, what makes you nervous even now?

Factual errors, even small ones. I try to do sufficient research so that I can avoid these, and I am very fond of fact-checkers and proofreaders, but I always feel that a factual error can undercut the argument you are making and blow it up.

If you get distracted by new ideas while you’re involved in a project that will take a long time to finish, what do you do to stop yourself from moving on to something new? Or do you work on more than one thing at a time?

I usually put off the idea but still harbor it and think about it. I don’t mind a little marination. I have had projects jam into one another, though. In that case, I split the week and work on one thing for a few days, then the other, back and forth.

I enjoyed writing almost everything I’ve ever written creatively, in one way or another or for one reason or another, but one short story in particular was just a whole lot of fun. What’s the most fun—pure, light, giddy fun—you’ve had writing, so far, and what made it fun?

The most fun was Moo, because I thought I was really funny and I laughed at every joke, and it didn’t matter if anyone else did or not.

The Greenlanders was utterly involving, and after the first fifty pages seemed to write itself. That was an amazing experience, but not one that I’ve wanted to repeat, because it was too weird.

Asked whether it was hard to write sex scenes from a man’s point of view for your novel Good Faith, your answer was, “No, I just changed penis to cock or dick.”

That made me laugh, and because on the surface it makes writing sex scenes sound simple, I almost forgot that before those words could be changed (even in the joking example), the foundation of a good sex scene would still have to exist.

Sex scenes are not about getting aroused. They are about showing how a particular character goes about having sex, what it means, and what happens next.

They might be arousing, but what I really want the reader to do is keep reading, so the scenes have to be narratively interesting and meaningful, as idiosyncratic as any other scene. That means that you have to think about and investigate sex and relationships as frankly and intently as you would anything else that you are writing about (say, changes in the banking rules).

The more you treat it as just another thing, just another interesting thing, the better your sex scenes will be.

You initially imagined your trilogy, The Last Hundred Years (Some Luck, Early Warning, and Golden Age), as a single story in three volumes, the first two volumes ending mid-sentence, their subsequent volumes picking up the thread. Your editor didn’t go for it.

How did you feel about the dismissal of your artistic vision for this story you wanted to tell? Was it easy to accept because, after all, writing is a business, or can it be frustrating to not have the same artistic license as, say, a painter, who owns the whole canvas, and to not be entirely free to write “a novel of your own”?

There is always back and forth with the editor and with the publisher, unless you are Susan Sontag. The editor is your first outside reader, and the publisher is in it to make money, some of which goes to you. So it’s a good idea to at least listen to the publisher’s ideas about how the book you have written will best be organized to appeal to an audience.

In the end, you don’t have to listen, but it’s not bad to do so. After you are dead, they can publish the uncut version, and readers can decide who was right.

Getting started can be frustrating, and I have no advice for people trying to get started today, because my experience is outdated. But there are plenty of authors from all eras who had a hard time getting into print. I guess my main advice is to keep at it until you just can’t stand it anymore.

It’s good to have friends and colleagues who are supportive and maybe trying to do the same thing, so that you can trade contacts and tips and commiseration. I think maybe having contacts and being in a group gives you a better chance at having some good luck.

You tell a story about how having won the Pulitzer Prize helped in an introduction with Arianna Huffington, who then invited you to write for the Huffington Post. Has the Pulitzer been useful in that way many times, and what are some of the pressures, if any, of having received the award?

The Pulitzer makes you famous, at least for a while, and so there are advantages and disadvantages. If you win it early, maybe you will be intimidated by the expectations people now have for you, but if you win it later, chances are your habits are formed, and it’s more of a glancing blow.

I tell that story about Arianna Huffington mostly as a joke. I think she would have let me contribute to HuffPo if I hadn’t won a Pulitzer. But I also have always lived away from the literary hot house, in Iowa or central California, so most people I relate to on a daily basis don’t care about it. That’s a good thing.

Speaking of the Huffington Post, many writers are very vocal in their contempt for a publication that typically doesn’t pay its bloggers but instead offers exposure, thereby reducing the value of writing overall, say those writers. What are your thoughts about publications that offer writers exposure, but no pay?

Well, they are proliferating—I just wrote a piece for the Literary Hub. But I was grateful to Arianna and did not mind not getting paid because I had a lot of feelings that I wanted to get off my chest, and no one in the world would have paid me for them. When I was just starting writing, most of my peers got published in alternative literary magazines—there was no money in that, either, but at least you were published and might get some compliments and some exposure. So I don’t think things are that different.

What in your writing life has excited you the most—made you feel, “Ah! I did it”—and what do you still want to achieve?

When The Greenlanders was about to be published, I was walking down the stairs in my house, and I thought, “I’ve written a great novel.” And it scared me to death. Not that people wouldn’t see it as that, but that I didn’t quite know where it came from, or how it happened. My greatest literary pleasures come from what I think of the books, and my second greatest come from what my husband thinks of the books, and I do like to get good reviews, of course.