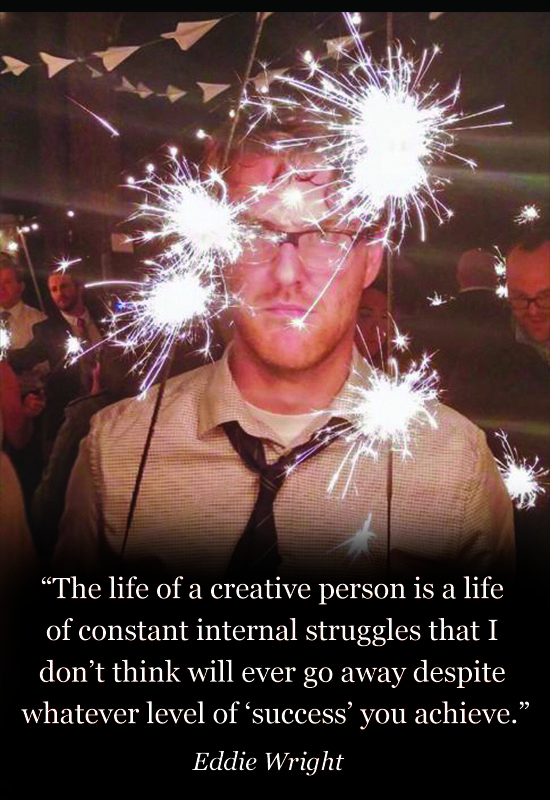 In this 5 On interview, Eddie Wright discusses artistic collaboration, why he adapted his novella into a graphic novel, marketing straight fiction vs. marketing comics, and more.

Eddie Wright (@eddiewright86) is an author, comic book writer, blogger, and editor. His work has been called “stunningly original,” “authentic,” “bizarre,” and “brilliant.”

You can read his writing in the novella Broken Bulbs, in his comic series Tyranny of the Muse, in BOOM! Studios’ Regular Show comic series, in the upcoming Lake Imago comic series (with Jamaica Dyer), and elsewhere.

KRISTEN TSETSI: Of the superhero comics you read as a kid, which were you most likely to run to the store for when the new one came out, and what was it about superhero comics that appealed to you as opposed to something like my old favorite, Archie Andrews and his teenybopper bunch?

EDDIE WRIGHT: The Punisher and Batman were my favorites. I’ve always liked the lone-vigilante thing over the superpowered hero or team thing. I like weirdos with troubled minds, and those guys fit the bill.

As a kid, superhero comics appealed to me because they were fun stories about awesome people who could do incredible things. When I was little, I was obsessed with action movies, funny cartoons, horror, and science fiction, and superhero comics could be all those at the same time.

Archie is cool though. I always liked the whole Riverdale gang and read that stuff as well.

What inspires the stories you tell in any form? What gets you excited to write?

I like to explore different ideas and try to find some kind of authentic truth. Regardless of what form the story takes, I try to remain as honest and real as I possibly can. I want stories to be entertaining, but I want them to resonate and communicate something that resonates in me. It’s really about figuring things out for me on the page and hoping people get it.

You said in an interview, “When I realized I could start writing and maybe actually turn it into a career, I wrote a book.” What did you initially envision as your writing future (and what your professional life would look like), and how has reality matched up?

When I decided to publish Broken Bulbs I really don’t know what I envisioned. I’m not sure why I did it or why I thought anybody would read it. But I did, and they did.

It’s honestly very strange, now that I think of it. I’ve always wanted to write for a living, and teaching myself how to make it work on the Internet has resulted in some kind of writing career. I write and edit as my day job, and do these weird stories and comics as the side gig.

When I first started this whole thing back in 2008 or so, I was a video editor with aspirations of being a professional writer. I found out about self-publishing and decided to give it a go, which forced me to learn how to do so much in service of the book. How do I design a cover? How do I put together pages? How do I design a website? How do I manage and edit a blog? How do I promote myself? How do I network with other creative people?

I had to learn it all. If I hadn’t jumped in blindly, I probably would still be working in video and not be a pro writer. Being clueless caused everything, and with this whole comics thing, I’m sticking with that strategy. It seems to be working out so far.

Tyranny of the Muse was created when you thought your novella, Broken Bulbs, would make a good comic book. What in text-on-the-page fiction reveals itself to be something meant for graphic art and comparatively limited text?

I’ve always been a pretty visual writer, and when I write prose I try to create a feeling that evokes some kind of sensory connection. I want readers to feel like they’re standing in the main character’s shoes and feeling his world. I want them to experience it; I want them to smell it.

But at the same time, I think overly descriptive writing is boring. So I often describe things in a way so the reader can feel how a character feels about those things or considers them, rather than explain what color the wall is and what pattern is on the carpet.

With comics, the art can create the same feeling, but readers can actually see it. My comic scripts are very similar to my prose in that I don’t overly describe anything. I let the characters’ feelings and dialogue dictate the visuals.

Collaborating with an artist on a story seems, in theory, like a lot of fun. Then again, it could also turn into a deeply complicated, potentially competitive relationship, like the one between Eloise creator Kay Thompson and illustrator Hilary Knight. What has been your experience working with illustrators? Are the relationships typically easy, or are struggles to be expected?

Collaborating is interesting. It’s a relationship like any other. So far, I’ve been lucky with the artists I’ve worked with. They seem into what they’re drawing and understand my intentions. Struggles are definitely to be expected because you’ve got more than one human being in the mix. When two or more people are involved in anything, there’s going to be some friction. But the friction isn’t really contentious.

It’s creative work. It’s how I think great things are made. There’s discussion, disagreement, and conversation. Never fighting or pettiness. I’m sure people have gone through that, but I haven’t. I’m pretty easygoing when it comes to collaborating. I like it. And I feel like as long as I’ve done my job communicating my intentions clearly—which really is a writer’s job, period—then we’re in good shape.

You didn’t make it a priority to pitch Tyranny of the Muse to editors or publishers. Why?

I self-published Broken Bulbs, so I figured why the hell not just do it? I grew up playing in punk bands and going to little punk shows in Elks Lodges and firehouses where a bunch of teenagers performed music and sold tapes, CDs, T-shirts, stickers, and all that. None of those kids asked for permission before doing it. They just did it. That type of thinking is in my blood. It’s what I know. Just put it out and see what happens.

But, as my writing career takes shape, working with publishers and editors is making more sense for me. I’ve always been open to working with publishers, and I have no problem with that sort of thing, I just didn’t consider it at the start, and I don’t let it stop me from trying. So, I have ended up working with the publisher Alternative Comics to release Tyranny of the Muse both digitally and in print. But that wouldn’t have happened if I hadn’t established the series at first. It’s really about taking the leap.

Marketing and selling fiction vs. comics is definitely different because there is a world and community around comics that doesn’t exist in fiction for me.

There are definitely pockets of shared interests in fiction, but not like there are in comics. There’s a built-in audience for certain kinds of comics and a world to reach out to. In fiction, you really have to find your own way and build your own thing, especially if your work doesn’t neatly fall into a specific genre.

I imagine if you write standard horror or science fiction or fantasy, it’s different—but if you write some weird amalgam of the three, you’re a tough sell.

How beneficial, or even critical, is it from a sales standpoint to attend conferences and expos?

For me, it’s been very beneficial to attend comic shows. It’s great to be able to pitch the book to readers in person, see their reactions, and sell it to them. It makes the whole thing feel more real.

When you’re trying to do it all online, the only way you can tell if anybody is interested in your stuff is if they “like” or comment, or something like that. But in person, you can have a conversation about it. It’s very good for the morale, especially if someone tells you that they already know about your stuff because they saw or read it online. That feels good.

Outside of conferences and expos, what do you actively do to promote your work, and what have you found to be most effective?

I do the usual stuff: Facebook, Twitter, Tumblr, my own website, and an email mailing list. I try to promote myself without being obnoxious. This is the hardest part of it all, I think. It can feel like you’re just screaming at nothing a lot of the time, and often you are. But being authentic is the best way to approach this side of the life. Set aside some time and poke around on Twitter. Follow people who are doing what you do, talk to them, share their stuff, be sincere. You’ll find some traction that way.

Also, building a substantial email list is a huge benefit. I think that’s probably the best way to market yourself online because you have a captive audience that isn’t bound by the weird algorithms of some social media company.

In your history of trying to sell your work, what got your hopes up or made you confident—”This will be the thing! This will do it!”—only to send you crashing down? How did you handle it initially and what did you learn from it?

I’m in a constant state of teetering on the edge of crashing down all the time. But somehow I keep doing it. I’m probably the most negative optimist I know. Everything feels like, “This will be the thing! This will do it!” and nothing feels like it works to the extent you think it will.

The important part is stepping back and taking a look at the successes, even the minor ones, which, at this level, they all are. People buy my stuff. People have read it. People like it. Publishers are interested in words I write. People I don’t know have looked at things I made up and thought about them and considered them real and legitimate and connected to them and felt something.

The life of a creative person is a life of constant internal struggles that I don’t think will ever go away despite whatever level of “success” you achieve. It’s all a battle between what you want to do, what you have to do, what you can do, what you just did, and how you can do it better—all with a substantial dusting of “how the fuck am I going to pay the rent?” It’s fun.