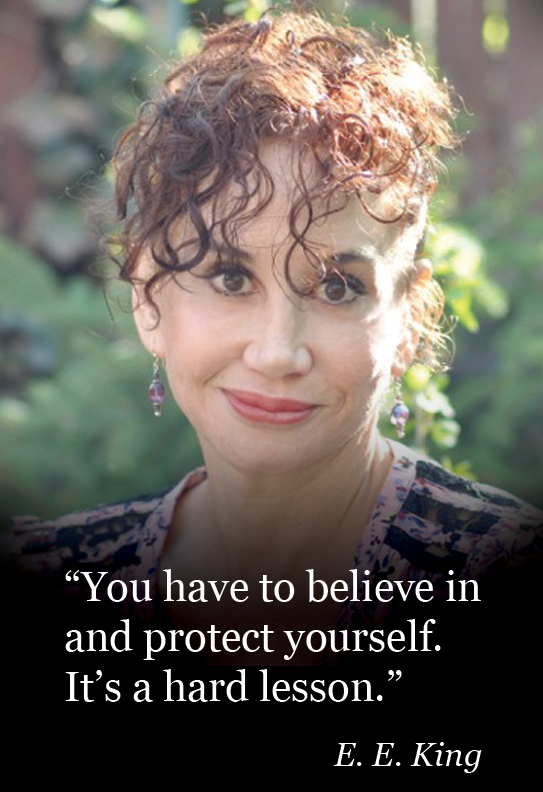 In this 5 On interview, Elizabeth Eve King (@ElizabethEvKing) explains why she became E. E. King, the importance of protecting oneself as an author, effective humor writing, and more.

E. E. King (Elizabeth Eve King) is a performer, writer, biologist, and painter. Ray Bradbury called her stories “marvelously inventive, wildly funny and deeply thought provoking.” He added, “I cannot recommend them highly enough.” She’s won numerous awards and has been published widely. Her books are the novel Dirk Quigby’s Guide to the Afterlife and the short story collections Real Conversations with Imaginary Friends and Another Happy Ending. The Feathernail and Other Gifts, the first in a series of children’s fantasies, will publish in 2015 (Eldritch Press).

Her most recent publications are in the anthologies Only Disconnect (Third Flatiron Anthologies Book 12), Darke Phantastique, Gemini Flash Fiction Award, and Best New Writing 2015 (Grover Prize Finalist). She will be artist in resident at the master museum of artist in Bermuda in 2015.

She’s lived in Mexico and has done extensive work with monarch butterflies; has worked with children in Bosnia, crocodiles in Mexico, frogs in Puerto Rico, egrets in Bali, mushrooms in Montana, archaeologists in Spain, and butterflies in South Central Los Angeles; and has lectured on marine biology in the South Pacific.
She loves to rescue baby animals, garden, and scuba dive.

KRISTEN TSETSI: When you started writing under E. E. King, it was so people wouldn’t know you were female. What brought you to that decision?

ELIZABETH EVE KING: Firstly, it was because Dirk Quigby’s Guide to the Afterlife was written from a male voice. Oddly, many of my adult novels are.

Two, people tend to take religious poking, and science fiction, more seriously (or comically) if it comes from a male.

And lastly, if anyone wants to call for a jihad against the religious mockery in Dirk, they will hopefully target Edward Edger King. Sorry Ed.

When attempts at humor writing fail, what is the writer usually doing wrong? Is there a key element that determines whether the humor will elicit a laugh or a pitying cringe?

Humor is in the funny bone of the observer. However, one of the things that makes humor work is the unexpected. It’s the twist of words or events that you don’t see coming. It’s also a key element in horror, suspense, and mystery.

I personally like some message in my humor. The banana peel may or may not be funny, but it’s more likely to be funny if it’s a giant genetically modified banana. The guy who slips is the evil inventor, and he falls into a vat of fertilizer. Feces are funny.

Also, humor needs to be brief. It’s economy of language. Prose can be lengthy—but not humor. Humor is tragedy tap-dancing. It’s common sense on acid. It’s the well-padded barrel that enables you to survive the Niagara Falls of life.

What writing advice does it make you twitch to see experienced writers giving new writers?

Mostly it’s thinking that their way is the only way. I think most writers give good advice. But there is such a thing as following your muse. Not everyone works from an outline. Not everyone figures each detail out. If you do, that’s great, but the road less traveled is not the same for everyone. That’s why it’s less traveled.

Between the final page of the first draft and turning in the manuscript—whether to an agent, a publisher, or a publishable file—what is your editing process like?

Ugly. I have been known to divide my novels into bits and then reassemble them. I have one at a publisher’s now that I disassembled and put back together more times than I care to count. The last one, now at my agent’s, turned into two books. The problem is you can over-edit and lose the flow or feel of the original.

I asked Ray Bradbury about editing. He said. “Stop reworking. Throw it up and throw it out there!”

However, I rework and edit a lot more than I used to. I tend to start at the beginning and then go back to the beginning a number of times before I edit the end.

Your short stories, novel, and novella together cover a range of ideas, many of them spiritual: religion, the afterlife, good vs. evil. What inspires your subject matter?

I am interested in reality vs. belief. We see only a small percentage of available light waves, yet persist in trusting that what we see, or hear, is real.

I’m interested in different perceptions of reality. Your dog sees and perceives a different world than you do (especially if you don’t have a dog) but it is no less real. A lot of my work has a biological/scientific base.

I think that most of the world’s problems are caused not by racism but by speciesism.

Religion creeps in because so many people believe it. I never really thought about it, but your question makes me realize that all my work deals with conflicting perceptions of truth and sometimes-imaginary dogs.

A book like Dirk Quigby’s Guide to the Afterlife, which pokes fun at religion (but each religion equally), seems like it would be an easy sell in some circles, and a tough sell in many others. What kind of obstacles did you come up against in your publishing and/or marketing efforts, if any?

Once again—ugly. I went though a number of agents. My agent tales are a good example of how humor is tragedy, or at least not funny, when it’s happening, but makes an amusing story if you survive. Many publishers, especially the big ones, shy away from conflict. It was at least two or three years before I found a publisher.

What was the most painful, embarrassing, or unexpected rejection you received on the road to publishing, and what did you learn from it?

Well, there was the very big agent who took me on and wouldn’t talk to me. All of her other two hundred clients were rich and famous, so I was always on hold. After a year of that, she quit to start an erotica online press.

There were also agents who wanted tons of rewriting and, after I had butchered my work, didn’t want it.

I’ve learned that you have to believe in and protect yourself. I think many writers, myself included, have signed contracts that rob them blind, deaf, and dumb because they get desperate. It’s a hard lesson.

There are a lot of unethical publishers. I recommend The Absolute Water Cooler and Writer Beware. They are places where writers can check out publishers and agents before they sign.

Also, if a contract is too lengthy, and you do not comprehend it—get legal advice.

What marketing tactic did you think would be a sure thing that ended up being not so effective?

I did a few shorts for Dirk that I thought would garner more hits. Maybe if I could have done one a week as I had planned, that would have worked, but I lost my editor.

I also thought offering giveaways would be more effective.

You seem very actively engaged in promoting your own work. Videos, interviews, articles … How do you allocate time for writing and marketing, two efforts that require completely different kinds of creative energy?

Yes, and I should do more. Of both.

This makes me think of your question about writing advice. There are people who have a strict schedule and know what they’re doing every hour of every day. I have more of a laissez-faire attitude. Not that I don’t try to find opportunity. I do. But I really try to take advantage of every opportunity that is offered. I go to readings, conferences, etc.

When I am writing short stories, it’s more an inspirational flow than writing a novel. A story bites you and you write till it lets you go. You can’t do that with a novel. A novel is more like an infection that lives in your blood for a year, or however long it takes. I find doing interviews a welcome escape. Also every experience teaches you different things. For example, I learned a lot by answering your questions.

Unfortunately self-promotion is necessary these days. I also use SocialOomph so that when I am writing I can cut, paste, and schedule tweet quotes daily. I don’t know if this brings readers, but it’s not time consuming.

Why did you decide to self-publish The Adventures of Emily Finfeather, and how did that experience differ from that of publishing with the presses that released your other work?

Emily Finfeather is a tale for mature children (nine and older) and immature adults. The extensive vocabulary is explained by footnotes. Footnotes live at the bottom of the page and give you extra information, misinformation and/or facts about some parts of the story. The footnotes were/are humorous and tell their owns short tales, about flying cars, thieving clams, and revolutionary ostriches.

A publisher who had already taken some of my work said she wanted Emily. Instead, she came out with her own children’s book that used “footnotes from a fairytale world.” I decided to rush to print.

I wanted to come out before she did. I did. I was fortunate to have the help of a wonderful friend and illustrator in formatting the book. But, there are still places that won’t review you and etc. if you self-publish.

Self-publishing works for many people, but I prefer working with a good publisher if I can. It’s more than enough to write, edit, and publicize.

I’ve un-self-published The Adventures of Emily Finfeather. It will be published this year by Eldritch Press, and I have a three book contract with them for two more Emily adventures.

I feel like I am just starting to reach my stride in having the opportunity to work with some great presses.