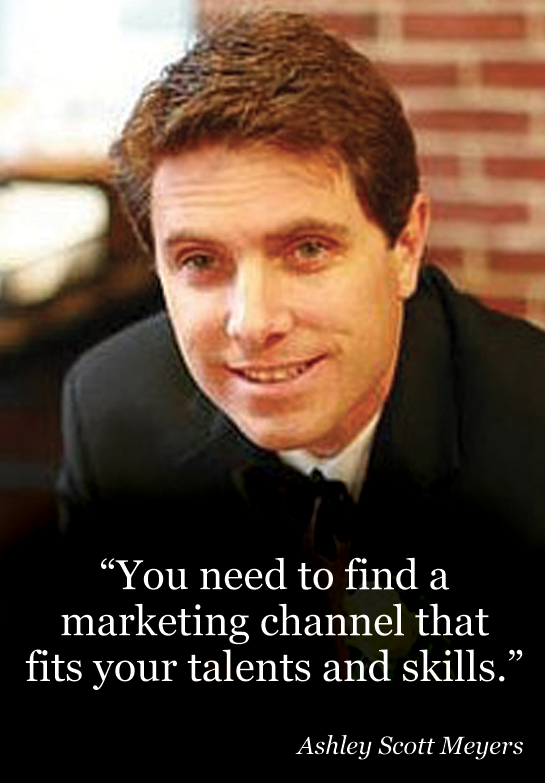 Screenwriter Ashley Scott Meyers (@AshleyMeyers) discusses the critical writing lesson he learned over time, what it takes to make a living as a screenwriter, what it felt like the first time one of his scripts was produced, and more in this 5 On interview.

Meyers has a master’s degree in mass communications with a screenwriting emphasis. His writing credits are listed on IMDb.

KRISTEN TSETSI: You have twenty-one loglines for completed, available scripts on your website. They range in genre from teen sex comedy to noir mystery to sci-fi to drama to romantic comedy to horror. Where do so many ideas for so many different kinds of stories come from?

ASHLEY SCOTT MEYERS: You know, I’m not sure. I like a ton of different types of movies, so I’ve written in a ton of different genres. It seems like some ideas are more appropriate for a given genre, so when I have an idea, I’ll work with it to find the right genre for it.

Which of your screenplays is closest to you or would mean the most to sell, and what inspired the story?

I think my baseball comedy is probably closest to my heart and would mean the most to see it get produced. It’s the story of a guy who loves baseball and wants to be a professional player but has zero athletic talent. So he has to compensate by working extremely hard. I often feel like this as a writer. It’s currently optioned, so I am hopeful.

When you finish the first draft of a screenplay, what’s your editing process like? Do you have trusted readers who offer feedback, or a hired editor? How many revisions does one of your screenplays typically go through before you feel it’s ready to present?

By the time I’ve finished a screenplay, I’ve already gotten a lot of notes on it. I am in a writers group where each writer puts up about twenty-five pages once a month, so I will be putting pages up as I write them. Keep in mind, too, I’m big on outlines, so I’ve spent quite a bit of time on an outline well before presenting any pages. Lately, once I’m done I will do a full read with actors and writers giving me notes to make sure it all works as one coherent screenplay. I will usually start sending it out shortly after that.

What I’ve found is that every producer who options a script will want some revisions, so rewrites will be done, but usually a little later, once I’ve found some interest.

What is it about screenwriting (vs. other forms of storytelling) that appeals to you?

I have always loved movies, and I’ve never really read a lot of fiction novels. So screenwriting seemed like a good fit for me. Even as a kid I loved movies and always thought it would be cool to write them. At some point I found Writer’s Digest’s Writer’s Market, and they used to have a section on production companies who would read unsolicited material. Once I found that, it all seemed possible, so I started writing almost immediately after that and started marketing before I was even done with my first screenplay.

What were some common writing mistakes you made in your early screenwriting days, and what challenge(s) do you experience now?

Early on I spent little time really considering the potential market for a script. I just had an idea I liked, and I would go write it. Starting out, I don’t think this is a bad idea because you’re not going to sell any of these scripts anyway. But as I matured and became more serious about actually being paid for my writing, I spent more and more time really trying to understand what scripts sold and why, and then I tried to let that influence my own writing as much as possible.

Your first attempt at selling your work was to send early material to listings you found in Writer’s Market. You later submitted query letters to ads in the back of trade magazines, which ultimately led to your first sale. But you also managed to get writing assignments through those ads. What was the nature of the assignments?

Typically what I would find in the back of trade magazines in terms of writing assignments were pretty low paid. Which was fine when I was starting out. For instance, in the late 1990s I was hired by a fairly well-established screenwriter to work in a group setting quickly writing up some of his leftover ideas that he didn’t have time to write.

I’m still in touch with this screenwriter, and he still has a script that I worked on that he likes. We often joke about trying to get it going again.

Tell me what it was like for you to experience, for the first time, one of your screenplays being produced.

It was bittersweet. The first screenplay I sold had been rewritten substantially, and I didn’t think that it was very good. So it was exciting, but some of the luster was taken off because of the extensive changes that had been made, which I thought really detracted from the piece.

I would say the greatest moment of pure, unadulterated joy was actually when I first optioned that script. My writing partner and I were paid $500 for the option, and we were young and naive enough to think that it was certain that this script was going to get made. At that point the producers were all compliments, saying it was perfect the way it was. It did get made, but as I mentioned it was so rewritten it was barely recognizable as our screenplay. But looking back at it now, the producers were very lucky to actually get the project going. Since then I have optioned dozens of scripts with very few actually getting made.

I will say this: the producers were a bunch of really cool guys, even though we didn’t see eye to eye on the script changes. My writing partner and I were on the set numerous times, and it was everything I thought it would be: exciting, fun, and mingling with celebrities.

In the book world, an agent is almost required. Do you have a screenwriting agent, and how beneficial (or not) is it to have one?

I’ve had several agents and managers over the years. None of them have done anything to help me sell or option any of my screenplays.

If you can get a good agent, then sure, they can definitely help. But I think screenwriters spend too much time on this and should spend their time trying to sell their scripts. I’ve found it easier to get producers to read my scripts than agents or managers. So that’s what I spend my time on. Perhaps one day a good agent will approach me.

How do you advise screenwriters with no credits to their name—but a screenplay to sell—to set themselves up online?

Try everything. There are tons of online services to help screenwriters—try them all. And don’t worry about spending a few bucks. It’s just money. You can make more. You need to find a marketing channel that fits your talents and skills. There are lots out there. I also have a free guide that is a nice primer to helping writers (with or without credits) sell their screenplays.

Someone says to you, “I want to make a quit-my-day-job living as a screenwriter.” What would it require to achieve that goal? How many hours a week would be devoted to it overall, on average, and how would you break it down in terms of the writing, building contacts, networking, etc.? What kind of person is least and most likely to succeed—not get rich, but pay bills?

I think before you quit your job you need to get into the routine of writing every day. I would recommend one hour of intensive writing per day five days a week. That’s realistic for most people, and if you stick to it you should be able to write one or two feature film scripts per year. Do this for a few years. Then you should have a few decent scripts. Once you have a script you feel is ready, I would start to spend twenty to thirty minutes per day (half of your one hour) marketing your screenplays.

Again, it’s going to take a little bit of time, but this one hour per day will add up over the course of years.

When it’s time to quit your job, you’ll know it. You’ll have optioned screenplays and be making some of your income from writing. You’ll know you’re close.

I think the type of person who is most likely to succeed is the person who has the discipline to actually do this. To me, that’s probably the single most important factor. Can you sit in a room by yourself for one hour per day, five days per week for several years without missing many days?