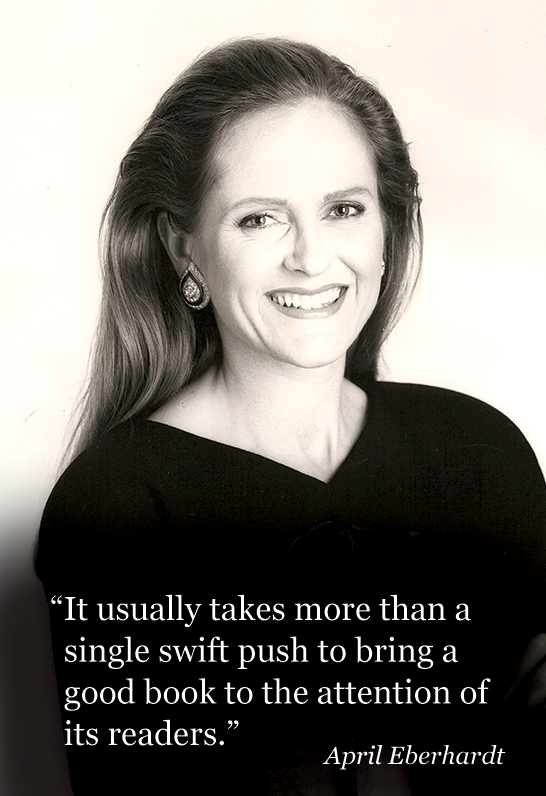 Literary agent and publishing consultant April Eberhardt discusses effective book promotion, what makes writing exceptional from a publishing perspective, her preference for representing women’s fiction, and more in this 5 On interview.

After twenty-five years as a corporate strategist and consultant, April Eberhardt joined the literary world as head reader for Zoetrope: All-Story, a literary magazine, followed by five years as an agent with two San Francisco–based literary agencies. She holds an MBA from Boston University in marketing and finance, a BA from Hamilton (Kirkland) College in anthropology and French, and a CPLF degree from the University of Paris. She represents clients worldwide and divides her time between San Francisco, New York, and Paris.

KRISTEN TSETSI: As a “literary change agent,” you offer services as either a traditional literary agent (one contract) or a publishing consultant (another contract). Of the 10,000 submissions you receive every year, you’ve said, you find fifteen to twenty to be exceptional. Is “exceptional” a matter of substance, marketing potential, both, or something else?

APRIL EBERHARDT: To me, “exceptional” means an utterly compelling story, one that’s original, beautifully written and tightly told, one that I can’t put down. I see five to ten of these a year.

Marketing potential comes second. While I realize that the traditional market may be looking for something easier to sell (translated, that means similar to other recent successful work), when I find a wonderful manuscript, I’m prepared to champion it until it gets published (which increasingly is via indie means—either partnership publishing or self-publishing.)

What was your most recent acquisition as a literary agent, and what made that book stand out to you?

Right now I’m representing a work of fiction about a young woman facing discrimination and horrific abuse as an African albino. The story is based on an actual cultural phenomenon, one that Pope Francis and the Dalai Lama have personally lent their support to the author’s campaign to help stop. The author’s passion and dedication to the cause, along with the strength of the story itself, persuaded me to offer representation. In addition to being a big book, I can see this becoming a major motion picture.

One of your pieces of advice to self-published authors is, “Read. Know what’s being published.” Do you advise to write to the market more than to the passion, or does that mean, “Know what’s already being published so you can write something original”?

I advise authors to write what they know, what they feel compelled to write, and what they themselves want to read. I don’t think there’s a way to write to the market, nor would I ever suggest that an author do so. Reading others’ work is always informative from a content and stylistic perspective, and can make an author’s own writing stronger. Commercially speaking, knowing what else is being published can be helpful when describing one’s own manuscript, be it to a reader, an agent or an editor. “Comparables” help us put a work in context.

Why do you prefer to represent fiction by and/or for women? Where does the line fall when determining whether a book is for all genders or women specifically? And do you think a cover could widen the audience if its design innocently tricked readers who typically wouldn’t read a “woman’s book” into picking it up?

Women’s lives, especially our relationships and interior beings, are of great interest to many women readers. Hopefully to men, too, but I’m focused on the women’s market because I feel we’re underserved as consumers in the commercial space, with its emphasis on blockbuster bestsellers, which often translates to guns, war, and other violence.

Crash, flash, and splash have their place in the world, but I don’t need them in the books I read, and thousands of women readers I’ve spoken to at conferences and elsewhere agree. Quiet, deep, well-wrought stories are often not the ones that make it through the Big Pub committee process and onto the shelves (and screens). I’m working to change that, one women’s book at a time.

As for covers, I’m a stickler for the most compelling and professional cover for each and every book. If done well, a good cover will attract its rightful readers, whatever their gender or preferences.

The same way you’d find a high-quality traditionally or partner-published book—by reading reviews! Goodreads is a wonderful resource for finding books that will appeal to you based on your tastes. The site is agnostic with respect to how a book or author is published, which is as it should be. Another good source is BookBub, which doesn’t differentiate among publication methods.

Self-publishing, especially with help from industry professionals like yourself, does give writers a reason to be excited. What should they undoubtedly be excited about, and what should they be aware of before they get too excited?

Thrillingly, self-publishing is open to all. Theoretically everyone can compete equally. Readers, not gatekeepers, get to decide which books are good. The big differentiator is quality.

To produce a good self-published book, a writer needs to learn the business, and do (or pay someone else to do) a professional job of editing, design, and distribution. Much easier said than done. Be prepared to devote a substantial chunk of time to preparing and promoting your book. Even if you hire a publicist, which I advise, you’ll still need to spend substantial time promoting it yourself (on social media, and perhaps at events).

Set realistic sales goals for yourself—most self-published books sell fewer than 100 copies, although with sustained effort a good book will likely sell more. And even with help, don’t be surprised to see your writing time constrained as you devote time to getting your book noticed.

It’s their bestseller/blockbuster orientation. The most common reason cited by editors turning down the manuscripts I submit is, “We can’t break it out big enough,” meaning sell thousands of copies in a period of a few weeks. There are now a million books published annually. It usually takes more than a single swift push to bring a good book to the attention of its readers. Big Pub can’t afford to do more than that for most. They put their money on a relatively few books that are similar to recent successes.

Some of your clients are authors you pitch to traditional publishers, and others are self-published authors who receive your professional support. What kind of specific support do they receive? If their book is “agent vetted,” for example, what doors are unlocked for them, and what other specific services do you provide / have you provided (for example), and how did that impact the authors’ sales?

Initially I work with authors to help them select the best publishing approach for them, evaluating each option (traditional, partner, self) based on their own goals, dreams, timetable, and budget. If they want traditional publication, we’ll begin there, with the understanding that we need a sound Plan B if we don’t break in.

Along the way I refer authors to a trusted, vetted group of professional editors, designers, publicists, and others. It’s hard to say which specific activities spur sales. I call it “the law of 100 little fires”—you need to do a lot of small things well, and get a lot of leads started, before one or more takes off and sales begin to climb. And you usually can’t tell which of the many efforts resulted in your success. You just have to keep trying.

Over time I’ve discovered that hiring a good publicist, one who’s enthusiastic about and experienced in promoting indie authors, is the best way to gain traction in that way. Agent vetting is most useful in the case of partner publishers, which as you know select only those projects they feel have a chance of succeeding. An agent’s endorsement is usually a fast-track way of getting the project accepted by a partner publisher.

I’ve found that my greatest value to a self-published author often is in helping her set out a plan and a budget enabling her to hire and work effectively with a good publicist. Though the PR world is far more open to indie work now than it was even a year ago, a publicist’s relationships are the best way to open those closed doors.

On your website you say you give priority to manuscripts pitched in person at one of several literary conferences. Because indie and self-publishing already favor the writer who has more money (to afford a publicist, a formatter, a cover designer, an editor, etc.), this could be perceived as another (inadvertent) unfortunate blow to a number of good writers who simply can’t make it to any of the conferences but would love to work with you or others who prefer in-person pitches. Why are in-person meetings critical, and what advice would you give authors stuck at home who would like to work with an agent who prefers conference pitches?

I will of course consider authors who pitch me online. I prefer in-person meetings since it gives us a chance to get to know one another, ensure that we share certain values, and feel confident we can work well as a team. As an aside, I’d urge every author to invest in attending a conference at some point, since it gives them the opportunity to meet other authors as well as agents, publishers, and editors, and benefit from the craft discussions along with the presentations on the business of publishing.

What have you seen authors do promotion-wise that’s been effective?

They develop a long-term publicity and promotion strategy, almost always with a professional publicist, and work in tandem with her to promote and publicize the book in every way possible, online and offline, for a very long while. The authors carry copies of their books and show them to people; they speak at libraries and bookstores, to book clubs (in person and via Skype), donate their books to charitable events, and are their very best advocates. No one cares about the success of her book as much as the author herself.