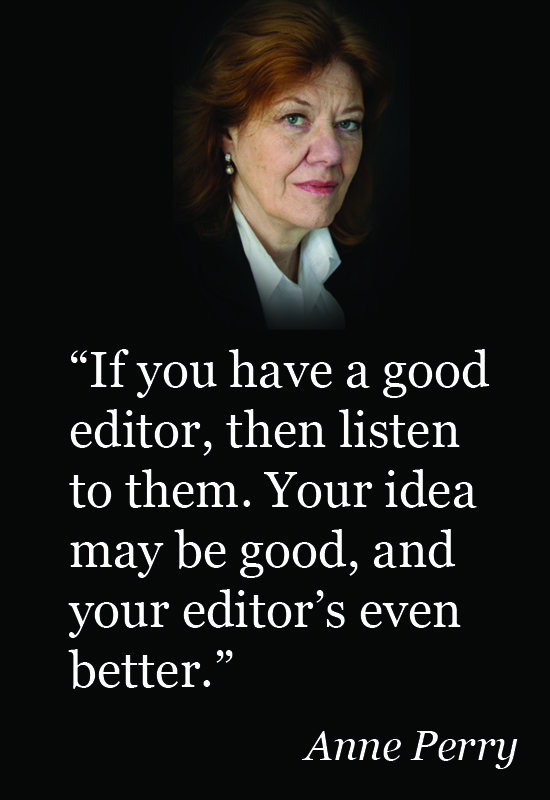 In this 5On interview, author Anne Perry discusses (among other things):

Anne Perry is an English author of historical detective fiction, best known for her Thomas Pitt series and William Monk series. Her publishing career began with The Cater Street Hangman. Published in 1979, this was the first book in the series to feature the Victorian policeman Thomas Pitt and his well-born wife Charlotte. It was filmed and broadcast on ITV featuring a young Keeley Hawes. This is arguably the longest sustained crime series by a living writer. Death On Blackheath, the latest in the series, appeared on the New York Times Bestseller list.

None of her books has ever been out of print, and they have received critical acclaim and popular success: over 26 million are in print worldwide. Her books have appeared on bestseller lists in a number of foreign countries, and The Times selected her as one of the 20th Century’s “100 Masters of Crime.” Anne’s most recent stand-alone is The Sheen on the Silk, set in the exotic and dangerous world of the Byzantine Empire.

KRISTEN TSETSI: You said once, “A lot of people think, ‘Well, I would like to be a writer. I have a great use of language.’ I don’t think that’s what makes a writer. It certainly helps, but you can have pretty basic language, and if you’ve got something to say, then you can be a writer.”

What did you feel you had to say when you began the early version of Tathea, your first effort at a novel?

ANNE PERRY: What I wanted to say when writing Tathea did not change from one draft to another. I wanted to write my beliefs in strong form as powerfully as possible. Who are we, where do we come from, where are we going? What are our possibilities, our responsibilities?  What is the purpose of life?  Is there one?

I wanted it to be an exploration for myself, and a message for others that would make them think, consider them our beliefs, and perhaps find much common ground.

The first one published was The Cater Street Hangman, and in that I wanted to explore all the secondary things we discover about those we love or don’t love, and above all about ourselves, under the stress of investigation.  That is, to me, an even bigger revelation than who committed the crime.  How do we deal with disillusion?

What mistakes did you make as a new mystery writer that you’ve since mastered (or at least corrected)?

Mistakes in early mystery writing days? I hope, since mastered! Not pacing the plot as well as possible, so losing some of the opportunities for tension, conflict, tying all the ends in without the mechanism showing. I am always delighted if I surprise people at the end, because I don’t expect to. But more than surprise, it must make sense. The mystery is only the vehicle for the real story, which is the moral dilemma, the social ill, the exploration of what went wrong.

What plotting advice would you give someone about to write their first mystery?

Write a very detailed outline so that everything makes sense. No character at all ever does anything without a reason—good or bad. I would give quite a bit of time to the “back story”—everything that happened before your first page. And don’t forget that villains must be “human” and that they keep on reacting, as well.

You recently adapted Southampton Row, one of the books in your Charlotte and Thomas Pitt series, for the screen. What challenges and what freedoms did you experience when writing the adaptation?

In a screenplay you will have to reduce possibly 500 pages of manuscript down to 100 or 120 pages of script. Inevitably that means cutting out some complete story lines and several characters, possibly combining two or more characters into one. Almost all description goes, which helps. Any interior monologue, trains of thought, etc., go.

Pick out the main story and stick to that. Remember that this is about scenes, not words. A good scene will serve several purposes. Actually, it should in a book, also!

Learn to sacrifice! It hurts, but it will be far stronger in the end. In a book one can reread anything you find hard to understand. In a film you get it once, then move on to the next.

But it IS fun, a second chance to tell your story. How often do any of us get a “second bite at the cherry”? It’s a wonderful opportunity to explore what you could do differently, more powerfully, and in another medium. Pick out the guts of it, what is it really about? Go for it!

You’ve stepped outside of the historical detective/mystery genre now and then, but that’s the genre that’s been most successful for you. Do you ever feel chained to it as a result?

Historical mystery has given me wonderful opportunities and it is a very wide field. Tathea and Come Armageddon (its sequel and conclusion) are fantasy, The Sheen on the Silk is more straight historical, the mystery is minor. At the moment I am happy to be “chained” as long as I can move into thrillers as well.

The Cater Street Hangman was the first mystery you wrote—and the first of your books to publish. But you had written several novels prior to that. Had you tried to get those earlier novels published, and if so, what did agents or publishers say was the reason for their rejection?

Yes, I had tried several novels before getting published, but unfortunately I did not receive any advice as to what was wrong with them. On considering it, I believe they were not strongly plotted. This happened, then that happened is NOT a plot! A plot is this happened which caused that to happen—and so on.

What important lessons have you learned through error or by happenstance while promoting your work?

Listen to your readers, and if several say the same thing, they may well be right!

When an editor once suggested that you not reveal some of the character’s back story in a Monk novel you were writing, you went along, you said, because you agreed. What would have happened had you not agreed with the suggestion?

If you have a good editor, then listen to them, discuss the problem, come to a compromise as long as it is not a moral one—never do that! But every editor that I have had has been pretty good and taught me much. I did have ONE moral compromise, and I refused to make it. I was prepared to give back the advance rather than change. Fortunately, I compromised on a different issue and we came to an agreement.

If you haven’t got a good editor, see if you can change! How do you know if you have a good editor? Reputation helps. See what is said about her. Or him. See who else they edit, if possible. But mainly, take their advice and see if it works. It can be surprising how something works that you wouldn’t expect. Your idea may be good, and hers even better. And good luck.

You’ve said that even if someone offered to pay you double what your books earn, you wouldn’t quit writing. If, for some reason, publishers stopped publishing your novels, could you see yourself self-publishing?

If publishers refuse my manuscripts I would have to learn why and attempt to fix it. I have confidence that my publisher knows what they are doing. If they said the work was well written, but that they do not like the subject, or the period, then yes, I would consider self-publishing.

You write up to three books per year. How does the system of writing and publishing work for you at this stage in your career? Do you begin writing when you have an idea, or do you first have the outlines approved?

Three in a year is my limit, and that is working 6 days a week, 52 weeks. I plan all books in detail, work with my agent who tells the publisher the outline, and it is agreed before I begin. I never assume that what I write will necessarily be acceptable. I take very little for granted—fairness, help, yes, but not acceptance. I am always trying to improve. Aren’t we all?