Note from Jane: The following post is an excerpt adapted from from the newly released Write. Publish. Repeat. by Sean Platt (@seanplatt) and Johnny B. Truant (@JohnnyBTruant), with David Wright.

So you want to find those raving fans, right? Awesome. We’re about to give you the most boring advice possible. You’re probably going to be disappointed that we’re not going to offer you a magic way to get a ton more readers, but unfortunately that’s not how it works. Ideal fans and readers are gained a few at a time, and it takes time to build that bond, even if you experience a sudden and serendipitous burst of exposure.

For example, our friend CJ Lyons hit Amazon’s Top 5 and No. 2 on the New York Times bestseller list 1.5 years after starting indie publishing and, as a result, sold over a million books in 2 years—but that didn’t mean that her base of true, pure fans grew overnight. She has a mailing list of 15,000 highly engaged and responsive readers, but she started building that list four years before her first book was ever published.

So here are four ways to start finding and gathering your fans. This is long-term strategy.

The truth is seldom glamorous. Nobody wants to hear that, but it’s a fact. People will buy bogus quick-fix solutions all day long, but few want to hear that the way to build a business or make money is to work hard for a long time and never surrender.

We run into authors all the time who say, “But I don’t want to write more books. I want to find readers for the book I already have.” This is often said desperately, and we can sympathize. Writing books, especially when you’re new to the craft, can be difficult. The last thing many new authors want to hear after the hard slog is that it’s time to turn around and do it again. But here’s the painful truth: if you have one book, your chances of making enough to live on that one book are next to nothing. Your footprint is simply too small, and you’ll get lost in the noise.

We’ve created this list in order of importance, and “your other books” is first for a reason. If you can write another book and another book, your power is multiplied with every release. The effect is geometric. After enough books and time (no promises as to number or duration), you’re likely to reach a critical mass, where you’ve cast a wide enough network that your ideal readers will find it hard to miss you. That can, in some cases, lead to the erroneously named “overnight success” some writers see after spending thousands of nights writing.

So yes, write more books. Each book is a little funnel, and it’s out there scooping a few people toward you at a time. Some will stick, and read your other works. If you actually have other works for them to read, they’ll bond with you further. If you have nothing? Well, then what reason is there for them to stick around?

For advanced writers, the “other books” lead generation method can be split in half. You may have books you sell for profit as well as those that are out there for free. The for-sale books will give you a more qualified reader (hey, they plunked down money!), but plenty of free readers will convert in time. So be sure to write more, write well, and put solid calls to action prompting your reader to join your e-mail list in the backs of all your books.

2. Friends of Your Readers

I said that we put these in order, but this one is enmeshed with and just as important as the first item. Unsurprisingly, you activate and maximize this method by writing more excellent books.

One day this summer, I was sitting at a Bob Evans with my family when my phone vibrated in my pocket. It was a text from a fan, Kyeli. I don’t have the original text message, but I kind of wish I’d thought to save it. The gist was that Kyeli had been at a Target and overheard two people talking about this ridiculous series wherein a gunslinger rides a unicorn. Kyeli was a fangirl who made a request that we include a prophetic owl in the Unicorn Western finale. She’s also really outgoing, so for a few minutes in one city, two of our fans found each other in public and convinced a third person to read the books.

People may not be discussing your books in line at major retailers yet, but hopefully they are discussing them. If they are, you’ll gain fans automatically. You want a money machine that works while you sleep? Word of mouth is that money machine. It may churn pennies rather than fat stacks at the start, but it’s out there working for you, and builds with every passing day and every fresh release.

Word of mouth is huge. If you’re an avid reader (and if you’re a writer, you’d better be an avid reader), ask yourself the last time you got a book recommendation from someone you know. Now, ask yourself the last time you were persuaded to read a book by an advertisement. Unless you’re a very odd case, you get your recommendations from friends and family, not objective third-party sources. (Book recommendations on bookseller websites are somewhere in between. They’re automated, but they only recommend your books if enough of someone else’s readers also like your books, pointing to similar reading tastes.)

Write books that are worth sharing. Then more after that.

You have to be good enough at your craft that your books move your readers to feel something that they want others to feel. Reading takes a lot of time, and accepting a book recommendation is therefore an act of trust. Most people will only suggest books that give readers an excellent experience, not just an interesting story. You will get better at conveying emotion by writing more and practicing your craft, and will deepen that emotional connection every time you publish something new.

Now, because this post would be empty without a tiny bit of tactical talk, we’ll just add that you need as many easy entry points into your work as possible. Here are some examples:

Goodreads is somewhere between a social network and usual word of mouth. We give Goodreads its own mention in this list because it’s far, far more aligned than Twitter, Facebook, or any other flavor of the month. People on Twitter will maybe listen to book suggestions. On Goodreads they are actively looking.

At the very least, sign up for an author account and claim your books, which may already have rankings and reviews piling high. (Goodreads readers are voracious and proactive and can list books on their own. We’ve been astonished to see the obscure stuff that has activity on Goodreads.) Once you’ve done that, you can add a bio and a photo, link your blog, post in discussions, and so on.

Don’t try to game Goodreads. The way to use it properly is to act like a human, talking to readers one-on-one or in small groups. Remember, a writer’s brand builds slowly, person by person. If you show up regularly, are polite and respectful, have an intriguing personality, and keep producing new work, you can end up with a nice network of connections. But it’s still just about groups of readers and authors, not about broadcasting or spamming your releases. Goodreads members won’t like that, and you’ll lose following that way.

One last thing to note: the rating scale at Goodreads is different than that at Amazon. It took me a while to figure this out and then to make peace with it. Your ego may take a hit when you see that your 4.5-star book on Amazon has a 3.5-star average on Goodreads, but those rankings are actually more or less equivalent. On Amazon, most reviewers will only give three stars or less if they were “meh” about a book or actively disliked it, but a 3-star review on Goodreads means that a person liked your book a lot but didn’t consider it particularly earth-shattering. A 5-star review on Goodreads is really something to celebrate.

Don’t argue with bad reviews. Accept them and move on, only engaging—maaaaybe—if the reviewer says something factually inaccurate.

I feel like writing this as “You can go to [current social network favorite] and [some other trendy place] to find your ideal people,” but I’ll reluctantly fill in the blanks with a few of the current contenders: Facebook, Twitter, LinkedIn … Pinterest, maybe. Whatever else.

The blasé way we’re treating the issue of social networks may seem dismissive, because everyone knows that social networks are super important and that there is magic power in the latest big thing, right? I mean, there’s course after course out there about how to use [flavor of the month network] to make your fortune, so clearly that’s where the Easy Button is.

But if you’ve read this far, you know that’s total bullshit. You also just had to sit through several “find new readers” tips that amounted to us telling you to write better and write more.

That said—and with the caveat that we consider the use of any given social network to be a tactic—definitely take advantage of modern tools. The short version for now is don’t overthink it. It’s not a magic bullet, and for most people, it’s firmly in the 20 percent. Don’t try to “game” Facebook for 10 hours and write for five. Writing is always more important.

Be careful who you cultivate as fans and readers. It’s tempting to embrace an “all who will have me” sort of mentality, trying to find ways to please the maximum number of readers.

This is usually a mistake. In order to gain truly widespread approval, you must be as neutral as possible. No type of fiction is universally loved, so in order to move closer and closer to universal approval, you have to offer less and less of a “type” of fiction. Everyone is OK with a blank piece of paper, but the minute you start putting words on it, you’ll start losing the people who don’t like those words.

Writers desperate for readership (and money) will often compromise what they stand for by attempting to tell the world that “anyone with $5 to spend” is the right audience for their book. Resist this temptation. It’s fine if you end up discouraging the wrong readers by standing firm in what your books truly are, because doing so will gain you more of the right readers.

Don’t change who you are, what your books are, and what your brand represents in order to make a quick grab for an audience that doesn’t (and won’t) suit you. You will automatically grow both your truest fan base and your e-mail list by staying authentic and standing firm to your brand. 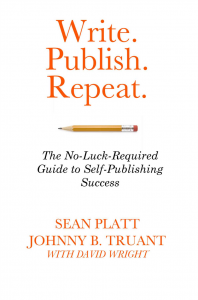 Note from Jane: If you enjoyed this post, then I highly recommend getting a copy of Write. Publish. Repeat.

Johnny B. Truant is an author, blogger, and podcaster who, like the Ramones, was long denied induction into the Rock and Roll Hall of Fame despite having a large cult following. Sean Platt is speaker, author, and entrepreneur. He is co-founder of Collective Inkwell and Realm & Sands, writes for children under the name Guy Incognito, and has more than his share of nose. Along with David Wright, Sean and Johnny host two podcasts: the horror/comedy show Better Off Undead and the Self-Publishing Podcast. Both podcasts are available on iTunes and both are for mature audiences only.