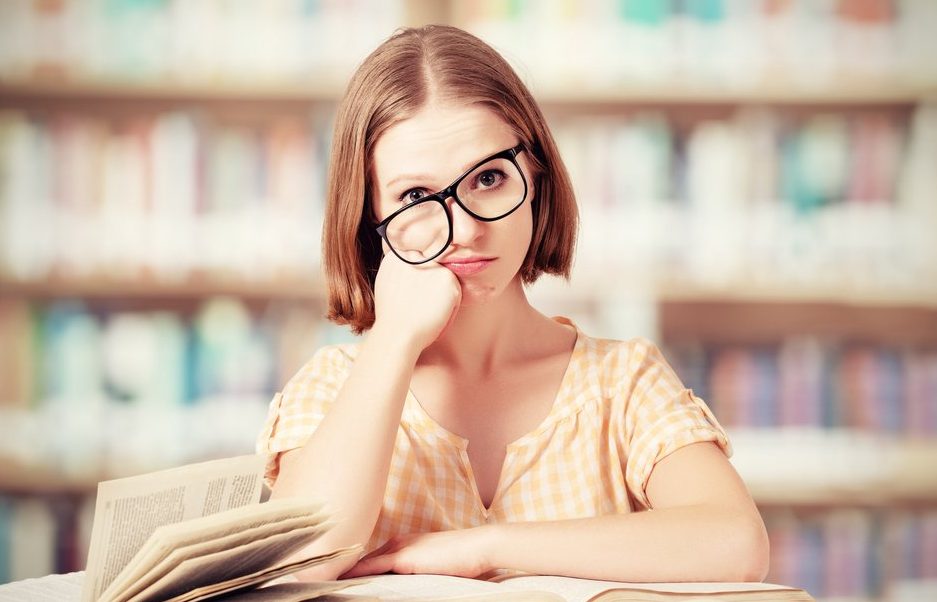 We’re all so judgy. We peer at storylines and dialogue lines and individual words, and we snort when a writer makes a choice we wouldn’t have made. We snort even more loudly at ourselves, those times when we just absolutely hate what we’ve written and think the author (Me! I’m the author!) must be an idiot. And then we’re stuck. So maybe we turn to someone else’s book for inspiration. Someone else’s good book. And then we’re more stuck than ever.

Over and over, we’ve heard that we need to read the best books first, learn from them, and apply the lessons to our own work. Never waste time with books you know you won’t like, ones that aren’t at the very pinnacle of your chosen genre or category.

This advice, like all advice, isn’t right all of the time. If the best is all you are reading, you’re limiting the sense of what writing is. You’re limiting yourself.

Here’s a wrinkle: Books you don’t like can be great teachers too. And when you’re really blocked and despairing, a bad book might give you just the help you need.

Here are four reasons why.

When you’re reading a bad book, it’s okay to let your nasty inner editor (let’s call her Judy) go to town. Let her eviscerate that best-selling whodunit with the plot holes a mile wide; she needs to get it out of her system. Dan Brown and Danielle Steel can take it; they have plenty of fans who love their work. Judy’s field day will give you a little break, and you’ll learn just as much from identifying what you don’t like as from what you do.

A gentler Judy can also show up to your workshop group and make it useful even when your writing isn’t up for discussion. By helping others identify weak spots in their work, you and Judy sharpen the eye with which you’ll read your own drafts later for revision. Being a discerning critic doesn’t mean you loathe the story or the writer, and you can honestly applaud the way each piece succeeds within its own parameters. As long as your comments are politely and helpfully phrased, it’s a win-win (a phrase often used in bad books).

2. A bad book can give your mind freedom in which to relax and explore new possibilities.

Maybe you feel a bad book doesn’t deserve your full attention. That can be a boon to you too. When you’re not reading with 100 percent full focus and trying to squeeze every last lesson out of the book in front of you, your hard-working creative mind might take Judy’s hand and wander down a different path—and bring back something that helps you solve a problem in your story.

If you want to learn from Jennifer Egan but you’re having trouble sustaining both lyricism and a plot, try reading the latest in the Harlequin line and let the structured approach to storytelling give your overly busy creative mind a little rest. The hit-all-the-marks-right-on-schedule plot might help you subliminally with yours too. I neither confirm nor deny having done this.

Which leads to the more conscious choices in Reason Number 3.

3. Bringing in tropes from different types of writing can inject new life into yours.

In recent decades, it’s become legit for literary writers to dive openly into genre writing—science fiction, comic books, pulpy mysteries, the stuff your college professors and their own Judys probably sneered at—and come back up with a long, rich novel inspired by the themes, structure, and language of those genres.

Think of Nobel laureate Kazuo Ishiguro’s riff on detective stories in When We Were Orphans, or Margaret Atwood’s post-apocalyptic Oryx and Crake, Susanna Clarke’s best-selling Jonathan Strange & Mr Norrell, or MacArthur genius Octavia Butler’s seventeen books of science fiction. Where would they have been without Agatha Christie, H. P. Lovecraft, Jack Finney, and now-forgotten writers whose words swelled the pages of magazines with names like Le Zombie, Analog, and Alfred Hitchcock’s Mystery Magazine?

And even way back when, now-canonical literary writers were already adapting genre tropes and tricks. For every House of Mirth that Edith Wharton wrote, she penned a half-dozen routine ghost stories; we just don’t hear much about them because they are, yes, “bad.” F. Scott Fitzgerald stepped into fantasy with his short stories “A Diamond as Big as the Ritz” and “The Curious Case of Benjamin Button.” Virginia Woolf told ghost stories too.

So the line between good and bad may not be so sharp after all. Which brings us to:

4. The definition of a good book can change. You might change it.

Writers we worship now may not have been so highly regarded in the past. I’ll give three examples: For one, Charles Dickens was the most popular author in Victorian England, but when he died, critics fell out of love with his work, even calling it “dull and wearisome.” For seven decades his reputation languished, until in 1940 George Orwell and other fancy-schmancy literary types started praising his work. Now it’s taught in just about every high school and college in the nation.

Zora Neale Hurston wrote one of the great novels of the last century, Their Eyes Were Watching God—and the world’s Judys took over thirty years to recognize its greatness. The book fell quickly out of print, to be rediscovered during the black and feminist movements.

Mid-century British author Barbara Pym published six sparkling novels of manners between 1950 and 1961, but when tastes changed, she couldn’t find a publisher. Then in 1977 she was named one of the most underrated writers of the century, and suddenly she was the It Girl. Fortunately she had never stopped writing and had several novels lined up and waiting. She fell out of favor again in the nineties but is back again now, thanks in large part to her devoted following in the Barbara Pym Fan Club.

Now it’s impossible to imagine a world in which Hurston, Dickens, and (sometimes) Pym aren’t considered to be among the great writers of the canon, that sometimes fusty list of things everybody should read. And if no one had looked back at authors deemed trivial (Pym), clumsy (Hurston), or all flash, no substance (Dickens), we wouldn’t have those books—or the thousands inspired by the writers who’ve read them.

Susann Cokal is a moody historical novelist, a pop-culture essayist, book critic, magazine editor, and sometime professor of creative writing and modern literature. She’s the author of several novels, the latest of which is Mermaid Moon (Candlewick Press). Her first young adult book, The Kingdom of Little Wounds, received a silver medal from the American Library Association. Her shorter work has been published in a variety of literary journals and anthologies, such as Electric Lit, Prairie Schooner, Writers Ask, and The New York Times Book Review. She lives in a creepy old farmhouse in Richmond, Virginia, with seven cats, a big dog, a spouse, and some peacocks that supposedly belong to a neighbor. Learn more at her website.